With the very first juicy little tomatoes and bright green basil leaves of summer hitting the market, chefs’ minds turn to fresh seasonal pizzas that make the most of what the garden has to offer. The best answer to “What goes on a summer pizza?” might pretty much wander into the garden and ask, “What do you have?

Take it from above (pings)

At Texas Christian University (TCU), the Farmers Market pizza changes daily, just as fast as summer produce rolls in. “Using the freshest seasonal ingredients from our local suppliers and freshly made dough, this colorful pizza is a flavor explosion in every bite,” says Sodexo Executive Chef Michael Smith, Culinary Director at TCU. This bite includes roasted tomato sauce and mozzarella and from there spinach, broccolini, red onions, peppers, olives and more. “Right before serving, the crust is glazed with garlic butter.” Sounds perfect for a garden party to us.

Growing your own vegetables – easier in most regions in the summer – can also mean alleviating some of your supply chain worries. Such was the case with Eileen Goos, Cura’s director of dining services for the South Carolina Presbyterian congregations at The Village at Summerville.

The Farmers Market Pizza at Texas Christian University changes toppings daily to keep up with the fresh produce.

Goos is working with the community’s Director of Life Enrichment on a garden club project for residents. From the garden, the kitchen team tops their pizzas with tomatoes, pesto and fresh herbs, including oregano, thyme and rosemary (all great on pizza). “During Covid we lost some momentum but now things are picking up with residents again and they are looking forward to the growing season,” says Goos, adding that a composting project for the garden club could be in the works. “And growing it yourself is an advantage now that we still have supply chain issues.”

At another Cura-run facility, The Lutheran Community in Telford, Pennsylvania, a brick pizza oven is the centerpiece of the Founder’s Fare restaurant. Chef Christopher Goggins celebrated the spring season with a Margherita goat cheese and asparagus pizza. The garden boxes, which the community receives from a local farmer half a mile away, really make summer pizzas ring, says Goggins. “The fresh, locally sourced ingredients, balance, and flavor combination make our margherita pizza a winner.” It also includes fun facts for residents, like “Why is it called a margherita pizza?” (It was named in honor of an Italian queen made with the colors of the Italian flag: red tomatoes, white mozzarella and green basil). The more you know!

And if you use garden vegetables as part of the ‘za, be sure to emphasize that in the marketing and/or in the pizza’s name, as with the Veggie Harvest pizza at Zaza Stonefire Pizza, a restaurant in a local mall owned by Liberty University Dining is operated by Sodexo. The Harvest Pizza is loaded with roasted peppers, broccoli and mushrooms seasoned with a signature blend of herbs. 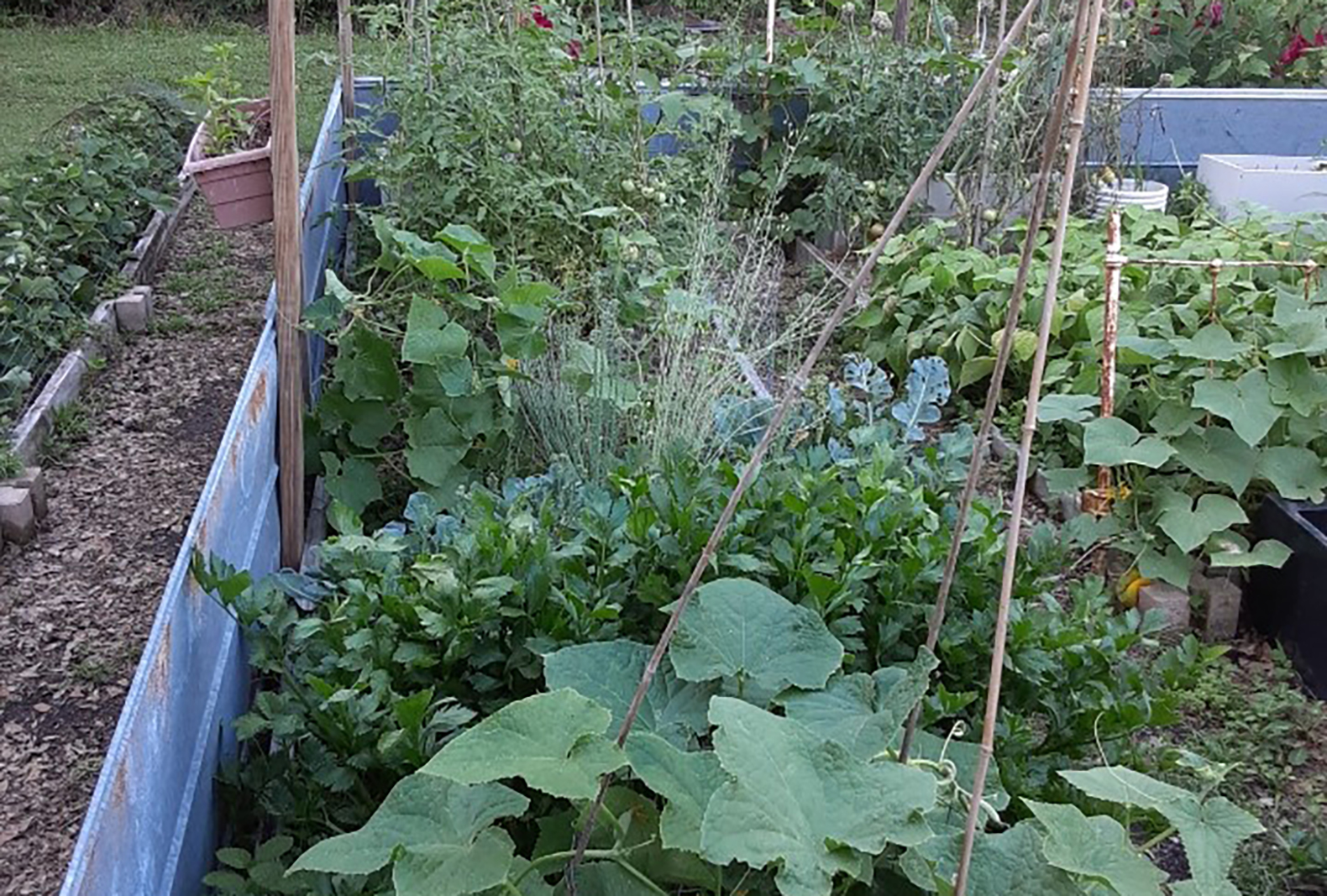 Xavier University of Louisiana’s pizza uses local produce, including Creole tomatoes, which are made super-flavorful from alluvial soils with riverbeds.

`A summer pizza MVP, Arugula is a last-second topper that clearly identifies pizza as garden-inspired. It’s the topping for many great summer pies, including the prosciutto shiitake artichoke pizza at Colgate University in Hamilton, NY. Created by Chartwell’s Higher Ed chef Walter Dunphy, “this is the perfect late spring/summer pizza,” he says. “The base is just a simple smear of toasted garlic olive oil and I use a mix of whole milk mozzarella and fontina cheese for depth and meltiness.”

Dunphy tops this cheesy, garlicky base with artichoke hearts, earthy shiitake, and salty prosciutto and pecorino-reggiano. The crowning glory is baby rocket tossed in truffle oil. A little goes a long way, but what a luxurious way to go!

And don’t forget the stone fruit of the summer as a topping. At Chapman University, Sodexo chef Bryan Liem tops freshly made dough with garlic-chili oil, mozzarella, prosciutto and local nectarines. The summery cake from the wood-fired oven is topped with local rocket, mint, burrata and a balsamic vinegar reduction. 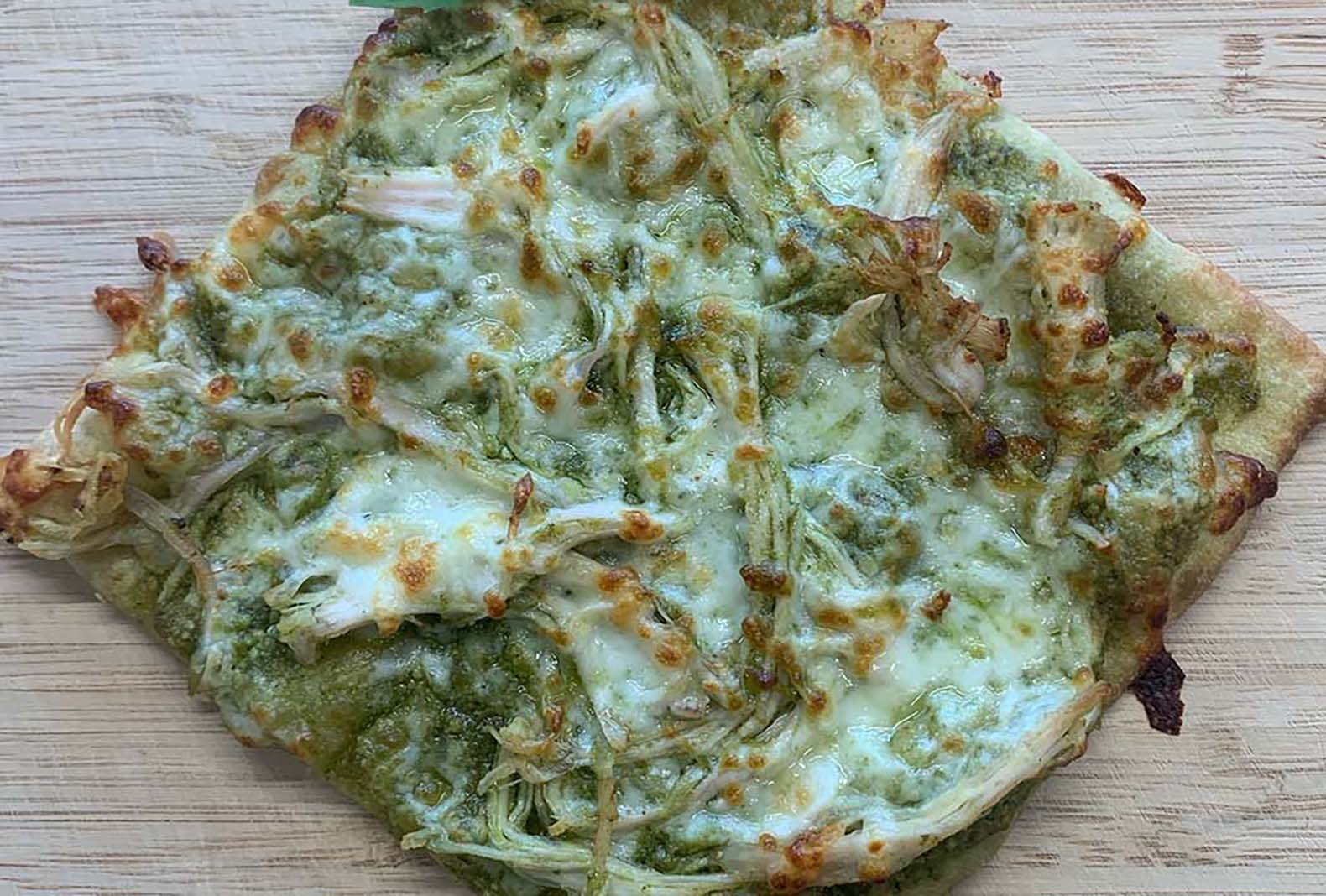 Sodexo chef Tyra Campbell of Howard Community College has created a jerk chicken pizza that she promises will “pepper up and brighten up your summer.” Count us among them! Her pie is topped with spiced rotisserie chicken, pineapple (oh yes, that belongs on pizza!), red onions, and mozzarella.

But it’s the sauce that really caught our attention: Easy to make but utterly unique, it’s three parts marinara, one part barbecue sauce, plus cumin and paprika. Smoky and perfect to bring out the tropical toppings.

Another cool sauce we stumbled upon is hyper-local to a very specific Louisiana community. Sodexo Executive Chef Drue Vitter at the Xavier University of Louisiana makes a couple of summer pizzas, including one with melt-in-the-mouth brie and grilled summer squash, red onions, and oregano. His Caprese pizza has one essential ingredient: St. Bernard Parish Creole tomatoes.

Traditionally, farmers in the communities of St. Bernard and Plaquemines in Louisiana marketed their tomatoes as “Creole”. According to these producers, the vine’s maturation process coupled with the rich alluvial soil (fine, fertile, and formed near river beds) produces a flavor found nowhere else, even in other parts of the state.

And we just can’t forget pesto as a sauce for summer pizzas. When chefs are faced with huge, overwhelming bouquets of basil, pesto comes to the rescue. The Morrison Health team at Charlotte’s Novant Health swaps marinara for pesto with the Pesto Sausage Mushroom Pizza, a summer favorite.

And Chartwell’s K12 Executive Chef Steven Dafronseca and his team at Barrington High School in Rhode Island use pesto as a sauce for student-favorite chicken pesto flatbread, available at the Made to Melt station. 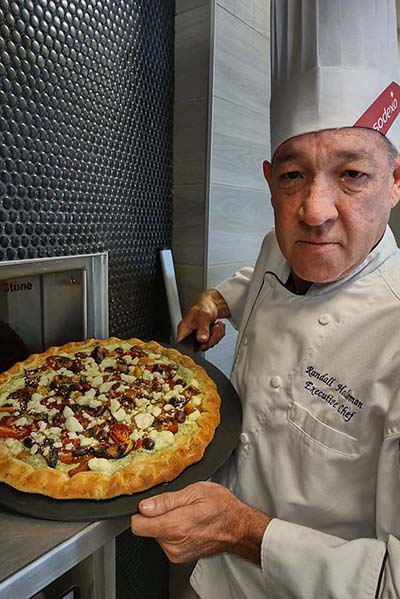 At Duke University, world-class pizza maker Kyle Rosch created the Il Forno concept for amazing pizzas a few years now , in Duke Dining’s crown jewel dining hall, Brodhead Center. His wood-fired pizzas are always in season, but his summery balsamic caprese pizza is one of his favorites. With an herb base of extra virgin olive oil, fresh mozzarella, chicken marinated in balsamic vinegar, bruschetta-style tomatoes, shaved parmesan, and a tangle of fresh arugula tossed in lemon, “this is the perfect summertime treat,” says Rosch. “We combine different well-known flavors here and put them together to create a beautiful wood-fired pizza. This recipe takes inspiration from appetizers like bruschetta crostini and caprese skewers. The fresh veggies are a must to get the most out of this beautiful, delicious pizza.”

The dough for this and all other pizzas at Il Forno is made in-house using a secret recipe. What we can tell you is that the batter is made using a cold fermentation method, which Rosch says results in a more flavorful crust “that our customers rave about.” He suggests changing up the Caprese pizza by removing the chicken and adding zucchini or summer squash for a vegetarian version.

The Towson University Summer Pie with cherry tomatoes, grilled zucchini, red onions, whipped basil ricotta, fresh mozzarella and a balsamic reduction is made extra special by the batter. Chartwells Higher Ed chef Muhammad Hussaini learned the art of bread making in his native Afghanistan and brought that knowledge with him when he moved here almost 20 years ago. His baked goods are legendary at Towson’s and he’s always tinkering with his pizza dough recipe. His tip when things have to be done quickly? Use more yeast and hotter water to speed up the rise.