Photo: Ministry of the Environment

Photograph from the Department’s report showing unscreened compost material from the Net Zero Waste facility in Abbotsford, stored outside the pad and collected on 7 April 2022

A rural Princeton organic processing plant that received thousands of hog carcasses in December has made some progress repairing its operations, which an Environment Department investigation found noncompliant – something the local Indigenous gang is pushing for.

In December, locals discovered huge piles of dead pigs at the facility that were being taken to compost after the devastating November 2021 floods killed thousands of farm animals in the Fraser Valley.

The Upper Similkameen Indian Band raised environmental concerns, telling Castanet they were concerned at the time after witnessing the animals’ improper storage on site.

On December 21, 2021, officials from the Department of Environmental Protection conducted an on-site inspection of the facility after a report was submitted to verify compliance with regulations for recycling organic matter.

A resulting warning letter dated January 18, 2022 was issued to the facility containing the findings of the inspection and outlining the concerns, including accepting materials in excess of their capacity, pig carcasses “dumped” from the reception site, and the improper treatment of leachate has been pumped into a drainage shaft several times.

While not all of the non-compliance issues in the Department’s reports related to pig processing, the issue of improper composting operations was clear.

Ocejo refuted several claims made in the ministry report at the time, saying they had found no pollution.

Further inspections took place this year with three site visits by environmental officers on 16 February, 7 April and 8 April, followed by a warning letter to NZWE on 24 May.

“Some aspects of the facility were identified as compliant, but some were still non-compliant, with many non-conformities not directly related to hog composting,” the Environment Ministry said in a statement to Castanet.

“The Department has engaged the City of Princeton and the Upper Similkameen Indian Band throughout the compliance assessment process and will continue to do so in future actions.”

In a statement, USIB boss Bonnie Jacobsen addressed the situation on behalf of the band. She said they were “disappointed with the disrespect the current operation of Net Zero Waste shows our land, water and people.”

Jacobsen said USIB’s interest in the Net Zero Waste situation relates specifically to its role as administrator of the Upper Similkameen Traditional Territory.

“We take our responsibility to care for our land and waters very seriously – they are a precious gift that future generations and all living things depend on. We will not allow the Similkameen Valley to become a dumping ground for harmful waste from the lower mainland, no matter what it is called,” Jacobsen said.

As in previous site visits, the officer noted that unchecked compost was being stored outside of the concrete slabs and there was evidence of leachate being released into the environment.

During the spring inspections, NZWE has relocated its heaps and some leachate sources have been corrected.

“I got that first warning and now the second check comes three months later with the second warning, but it’s much better. There are some issues with some piles, but they acknowledged that we weren’t able to address everything due to the winter conditions,” Ocejo said, adding that the site is currently under construction to add more concrete blocks to fix the violations.

“We’re not perfect, we’re definitely the first to admit that like any composting facility, we have areas to work on. But I think we’re on the right track. They told us that the [ministry] said almost everything is compliant now.”

Issues raised in the report include leachate from the compost heaps not collected in the correct pond, improper storage areas with no roof or cover to avoid water accumulation, and the need for all areas of the facility to have an appropriate leachate collection system .

“Directors and owners present at an on-site meeting on April 8, 2022 pledged to bring the facility to full compliance as soon as possible,” the report said.

“Some corrective actions have been taken regarding the storage and covering of materials on site. The ministry will continue to address this file until full compliance is achieved,” the ministry added.

“We embrace responsible and sustainable development,” said Chief Jacobsen. “We sounded the alarm months ago that Net Zero Waste was clearly non-compliant. This warning letter confirms what we saw this winter – Net Zero released contaminated leachate into the environment right next to the Similkameen River.”

A follow-up inspection will be conducted to ensure corrective action is being taken at the facility and to further assess compliance with the Organic Matter Recycling Regulation (OMRR) requirements.

“We are improving and will do everything in our power to be fully compliant and good neighbors for the community,” Ocejo said. “We are almost fully compliant and would love to work with the USIB and provide them with benefits for our project, but they would like to see that.”

“We are pleased that the Department of Environment is taking action and beginning to hold this operator accountable. The USIB will continue to look after our land and waters, for all of us,” said Jacobsen.

“We will continue to work with BC and responsible industrial companies to ensure that previous industrial pollution is cleaned up and any new ones are cleaned up quickly and effectively. Permits and approvals of composting facilities operating under OMRR regulations need to be addressed to prevent future environmental issues and support the responsible operators that are out there.” 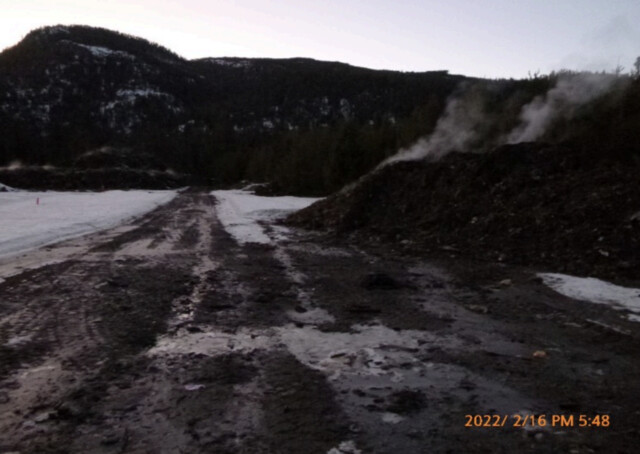 Photo: Ministry of the Environment