One community’s efforts to keep local traditions alive have resulted in a new coloring book.

GRAND ISLE, Maine – One community’s efforts to keep local traditions alive have resulted in the distribution of a collaborative coloring book to area schools.

Researched and created over five years by the Greater Grand Isle Historical Society, the Acadian Coloring Book celebrates Acadian culture in the St. John Valley region of Maine and New Brunswick. A total of 2,500 copies of the book were produced and distributed primarily to local schools to educate the younger generation about their family history.

The Greater Grand Isle Historical Society is a non-profit organization dedicated to celebrating, preserving and sharing the history of Grand Isle, Lille and the surrounding communities. The group conserves artifacts, collects histories and houses their collection in the former vicarage of St Gerard Parish and is open to the public.

Containing 43 pages of original artwork by former History Society member Leah Cook, the book details the daily life and beliefs of Acadian families from the 1930s to the present day. The captions on each page are written in Franglais, a mixture of French and English used by the Acadians and Québécois living in the St. John Valley.

The Greater Grand Isle Historical Society has launched a sponsorship campaign to give free copies of the books to all local school children. Local businesses and individuals donated most of the schools’ printing costs when few pages had been drawn, Cook said.

In addition to help from locals, the book was funded by grants from the Maine Community Foundation, the Maine Humanities Council, the Maine Arts Commission, and the Maine Acadian Heritage Council.

“This was really a community project the whole time,‘ said Cook.

Cook said she moved to Grand Isle in 1994 after her family bought an old farm. Cook lived on the farm and said she and her family started growing potatoes the old-fashioned way: hand-picking them. She attended school in The Valley until she left to join the Peace Corps, attended college in Oregon where she earned a degree in biology, and even drove semis for her father. 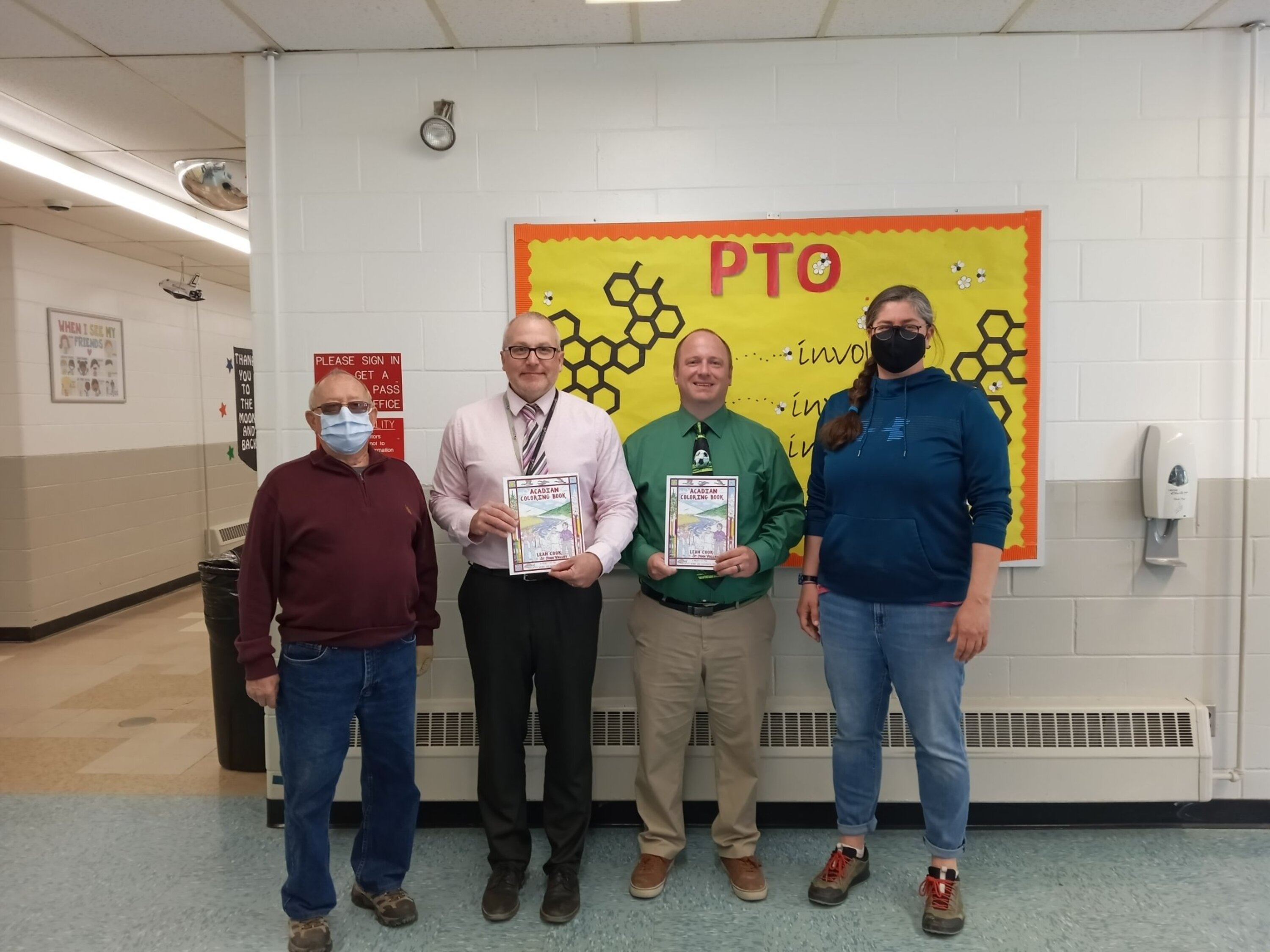 When she returned to Grand Isle in 2015, Cook said she became involved with the Greater Grand Isle Historical Society when a project they were working on, building a bread oven, sparked her interest. When Cook chimed in, she said she mentioned a project she saw when she was in the Peace Corps, where small, remote villages made coloring books detailing traditional carving styles and distributed them to schools.

“It was a way of connecting the knowledge of the grandparents to the children,” Cook said. “I said we could probably do something like that right here in The Valley. All cultural organizations talk about the same thing: how do we preserve and promote heritage, culture and language?”

The original plan for the coloring book was 6-12 pages of simple line art, but after reaching out to the community to brainstorm ideas for the book, Cook said there was a list of nearly 100 different topics to explore is applicable. The themes that came up the most were food, social traditions and chores, Cook said.

From there, Cook began interviewing people in their 80’s and 90’s and talking about their life as children in The Valley.

“I’ve also spoken to people who are starting families today because we wanted to connect both generations so everyone can reflect their experiences in it,” Cook said. 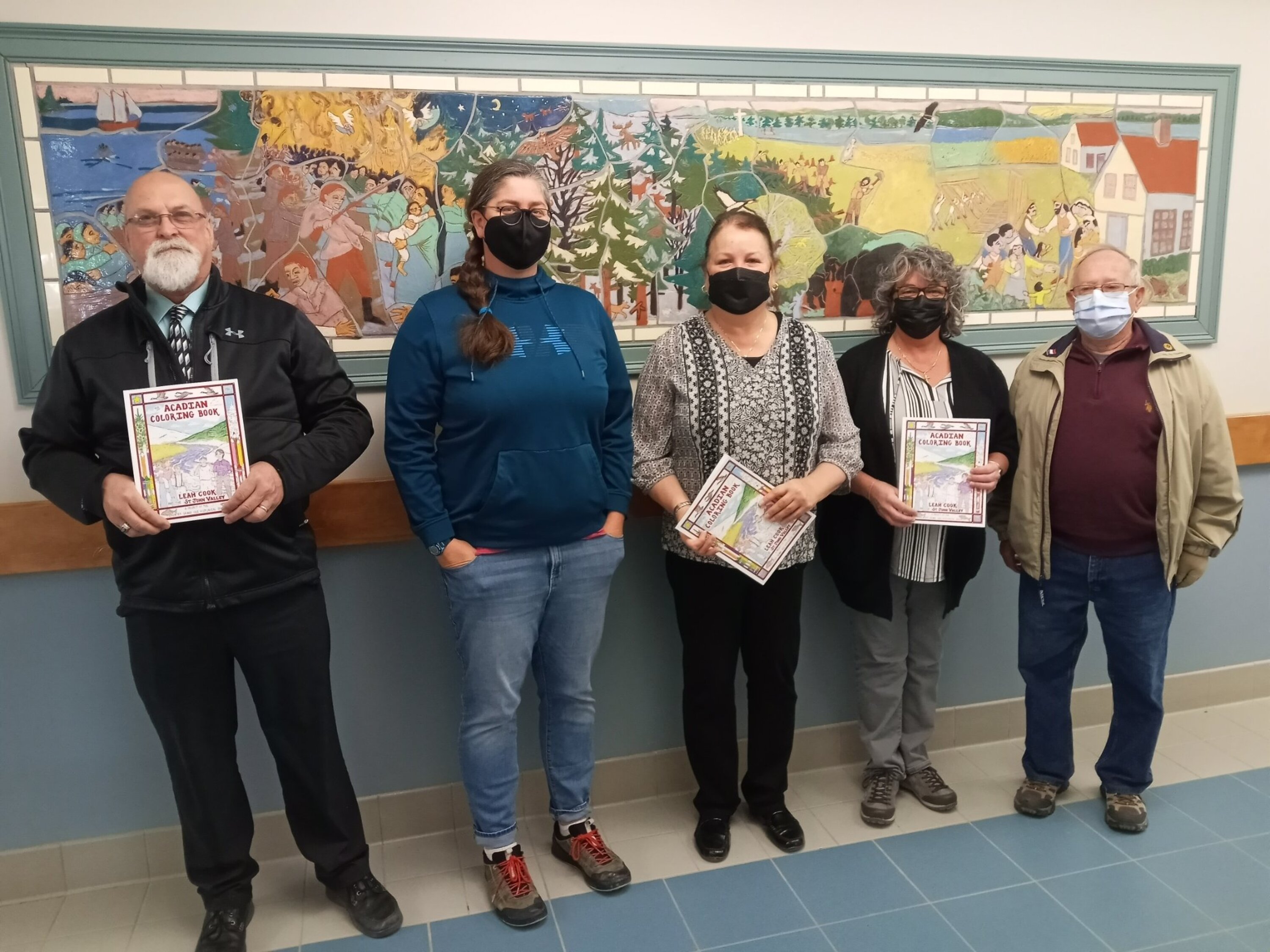 After the pages were drawn, Cook said the final part was adding the text to each page. Again, Cook reached out to the community, sending out the English captions and asking people to put the text in their own words in French or Franglais.

“With what they gave me, we created the final text,” Cook said. “It was sort of a custom blend to help non-fluent speakers learn from contextual cues so you don’t lose the plot while reading in two different languages, all blended.”

While the book was distributed to local schools, Cook said it wasn’t specifically aimed at any specific age group. The book’s pages have a highly detailed style that’s more like an illustrated children’s book than a coloring book, Cook said.

“We want people far and wide to know about this,” Cook said. “We put it out through the schools, but the history society also has copies for sale for people to go to our website and Facebook site to see what kind of deal that is.”