When you look at one of Trent McCauley’s silver wire wrapped crystal pendants, you see so much more than a beautiful stone and fine craftsmanship. The piece represents the man himself and the state in which he was born and lives. It’s like a piece McCauley went through, his story and what he went through. Part of his life, his journey, what brought him here. His family has been in Montana for the sixth generation since 1864; The stone also represents Montana’s mining history.

Trent’s journey began hunting moose in Whitehall in 2017. Along with several other hunters, he witnessed a UFO and it changed his life. Shortly thereafter, he decided to change his life, start over and clear up a few things. He sold all of his belongings, bought an RV and truck, and left Montana for Arizona’s Mojave Desert.

“During this time I started finding crystals on the ground; I was very interested in the qualities they had. I was on a vision quest at the time as I was processing a trauma that had happened in my life and the reasons I was the way I was was explored in herbal medicine, spirituality, meditation and some new age thought and Introduced to ways of life,” he said. “I continued to find these crystals everywhere, which really intrigued me, so I decided to make jewelry out of them and sell them when I could, or at least give them away because I felt like that they had a really good energy about them.”

Trent started out by making simple desert rose chalcedony crystal necklaces that people bought to give him an income. He then found a part-time job at a stone shop, where he was paid in stones that he turned into more jewelry to continue his creative pursuits.

“With my skills, I found other jewelry makers that I liked and I tried to replicate some things that I thought were really interesting,” Trent said. “It’s just kind of grown since then.”

Before returning to Montana, Trent spent a month traveling in the Philippines learning about the culture. He got tattooed by Whang Od, a 105-year-old woman, the last tattoo artist of the Headhunter tribe, who created tattoos using a stick and a bamboo feather. Trent requested a tattoo on his head, something she was reluctant to try because of the method, but she went ahead and gave Trent the credit of being the first person to be tattooed on the head by the Headhunter tribe, and one instant celebrity in the community.

Back in Montana, Trent chose Whitehall as his home, loved the area and identified it as the start of his journey. He’s been here for a year and a half.

“This feels like home; I grew up in Butte, was born in Bozeman, so I’m kind of right between the two. My family used to have a homestead in Waterloo so this whole area feels like home to me and I like it here; the community has been very supportive,” he said.

The self-taught jeweler mainly creates rings and pendants with a focus on the crystal wrapped with silver or copper wire, depending on the look of the piece, the budget and people’s desires. He admits that he does the work mainly for himself, but also because others also really like the finished product.

The heart of each piece is the crystal. While Trent has sourced crystals from around the world, he dedicated his Montana series to local stones and crystals, working with sapphires from the Phillipsburg mines; amethysts quarried around Whitehall and Montana moss agates from the Yellowstone River.

“We have so many different gemstones here in Montana, just about every gemstone color imaginable; we have something that represents that here in Montana. It’s the Treasury State for a reason,” Trent said. “I grew up in Butte, it’s the copper town, so it went very well with copper. With rocks and pieces from Montana, it just felt like it all belonged together.”

Interested customers can see Trent’s work and place orders on his Facebook page. He also offers wire wrap classes at Settings once a month.

In the future Trent would like to open his own stone shop and lapidarium in Whitehall to give people the opportunity to learn how to cut and polish stones and make jewellery. He also sees a potential collaboration with Paul Senn, a rock prospecting friend with mining claims in the area, an all-in-one experience for people to mine and then cut and polish the rocks they find.

“I think it would go really well here,” he said. “I’m hoping to keep growing this thing and see where it takes me. It took me halfway around the world and back.”

Trent is proud of his Montana heritage, his ancestors were all blacksmiths and his grandfather was also a silversmith, leading Trent to explain, “We’ve been bending metal in Montana for six generations, so I’m pretty proud of that lineage. “ 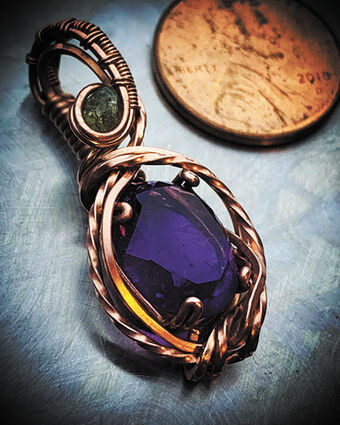 At the end of the day, Trent wants to be recognized for being happy and inspiring others to live their dreams and not give up on the things they are passionate about, but be happy with what they do. He hopes people see his jewelry and see the energy that emanates from the piece, the best compliment he can receive. After that, the craftsmanship, attention to detail and quality of materials make it clear that each piece is truly unique, no two stones are ever identical.

Trent has embarked on a journey and is happy where it has taken him.